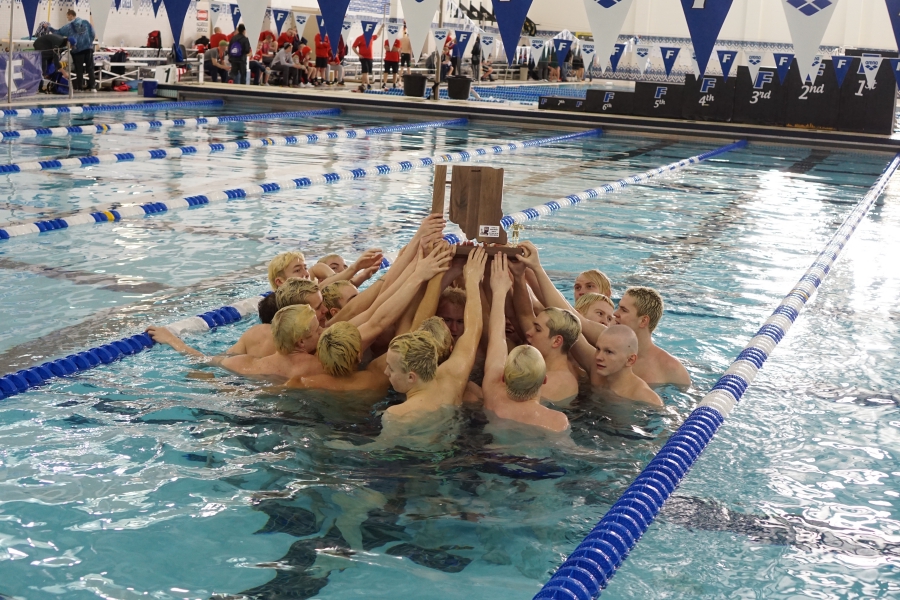 Since he was little, Barrett Daily had wanted to be on the starting blocks facing a pressure situation in a sectional.

So he wasn’t going to let the debilitating migraines that had bothered him earlier in Saturday’s meet sideline him when it mattered most.

“I have been here at Franklin forever, and I’ve watched so many sectionals here, especially when they started the streak,” Daily said. “I knew that no matter how I felt, I had to push through and give it my all for, not only this team this year, but for all of the teams in years past.”

Oliver spotted the host Grizzly Cubs a lead of 1.36 seconds on the opening leg, and Ries extended it to two and a quarter seconds. Center Grove’s Logan Dales and Ben Mitchell tried valiantly to make up the gap, with Mitchell gaining more than a second in the last 50 yards alone, but Franklin held on to win in 3:10.72, beating the Trojans by just .79 seconds.

Franklin finished the meet with 475 points to Center Grove’s 469. Martinsville was a distant third with 203 points; Whiteland (183) and Indian Creek (164) were fourth and fifth, respectively, while Greenwood (147) was seventh.

The Trojans, who defeated the Grizzly Cubs convincingly at the Johnson County meet in December, came into the week still looking like a solid favorite, but Franklin coach Zach DeWitt said enough things broke his team’s way in Thursday’s preliminaries to put victory within reach on Saturday.

“I had drawn up a plan — I had drawn up multiple plans — and at the end of the day, I just felt like we were going to have to swim a perfect meet,” DeWitt said. “(Center Grove is) unbelievable. They’ve got kids that fight, they’re deep, they’re tough; (coach Jim Todd) has always got a tough crew in terms of the way that they handle adversity. Honestly, it was just about finding a path to win.”

Franklin started on that path right away. The 200-yard medley relay quartet of juniors Oliver, Albert Nusawardhana, Mac Ratzlaff and Ethan Pheifer got out to an early lead and posted a sectional record time of 1:33.04 to hold off the Trojans, who also sealed a spot at state with a time of 1:34.11.

After the medley relay, Franklin was able to pull out in front behind a victory in the 200 freestyle from Ratzlaff (1:39.26) and a dominating performance from Oliver in the 200 individual medley (1:49.99). Both swims set sectional marks and helped the Grizzly Cubs build up a 24-point lead.

Center Grove countered with a sectional record of 20.66 seconds from junior Ethan Martin in the 50 freestyle and wins from Caleb Crady in 1-meter diving (426.85) and Tony Gipson in the 100 butterfly (51.66), but the Trojans still didn’t gain much ground overall in those events and Franklin was up by 18 at the midway point.

Then, Ratzlaff gave the Grizzly Cubs a big emotional lift by knocking off the favored Martin in the 100 freestyle, 45.59 to 45.74.

As the finalists paraded out for that race, Ratzlaff — walking right in front of Martin — appeared to intentionally slow his gait in an effort to get in the head of his Trojan rival. The junior said it was very much intentional, inspired by a story DeWitt had told about former Franklin standout Clayton Culp (whose sectional record in the 100 Ratzlaff broke on Saturday) doing something similar years ago.

“That was definitely on my mind,” Ratzlaff said. “I definitely try to be as big as I can and swallow up as much space as I can, and try to make it my environment rather than his.”

The Trojans still gained six points in the 100 freestyle despite Ratzlaff’s win, however, and took the lead with a big swing in the 500 free, but their edge at that juncture — just eight points — was lower than expected, and the Grizzly Cubs chewed it up over the next two events. First, the 200 free relay quartet of Pheifer, Kramer, Daily and Ratzlaff (1:25.12) won by less than half a second, and Oliver followed up with a sectional record of 49.16 seconds in the 100 backstroke.

After the 100 breaststroke, which saw Center Grove’s Justin Xia (second, 58.73) and Franklin’s Daily (third, 59.03) earn state callbacks, the two teams were tied at 435 points apiece, setting the stage for the tense winner-takes-all relay.

“Going through my mind was, ‘I’ve got to be a body length ahead of this guy,’” said Oliver, who swam the leadoff leg against Gipson. “I think the nerves got to me a little bit on the first 25; I (almost) whiffed the wall and I’m like, ‘Oh my gosh, oh my gosh’ — so I’m trying to pick it up. It was a really nervous race, but it was a really fun race.”

With a decent head start going into the last leg, Daily was determined to bring the win home.
“It definitely started hurting the last 50,” he said, “but I knew I had to come through for my team.”
Also earning callbacks to state were Center Grove’s Mitchell and Garrett Crist in the 500 freestyle; Daily in the 200 IM, Ries in the 200 free and Pheifer in the 100 backstroke for Franklin; and Nick Klenner of Whiteland, also in the backstroke. Indian Creek advanced Joey Smith in the 100 free as well as its 200 and 400 freestyle relay teams. Should Crady make it out of Tuesday’s diving regional, that would give the county an astounding 25 state entries.

The Braves’ relay efforts may have extended the career of senior Chase Smith, who left Franklin on crutches after appearing to aggravate a leg injury during the final event of the day. Indian Creek coach Brad Smith said that his son’s status for the state meet wouldn’t be known until a visit with his orthopedic oncologist this Thursday.

The Trojans and Grizzly Cubs, meanwhile, are sure of their status heading into state, and both teams are bullish on their chances to do well at IU Natatorium after putting on an instant classic at Franklin.

“It was tied at the end, and it was an unbelievable relay there; it was a great race, you know?” Todd said. “Franklin swam great today — they just lit it up — and we swam great, too.”

“This is an amazing day for us,” Oliver said. “Kudos to Center Grove — they did amazing today — but this definitely fired us up for state.”