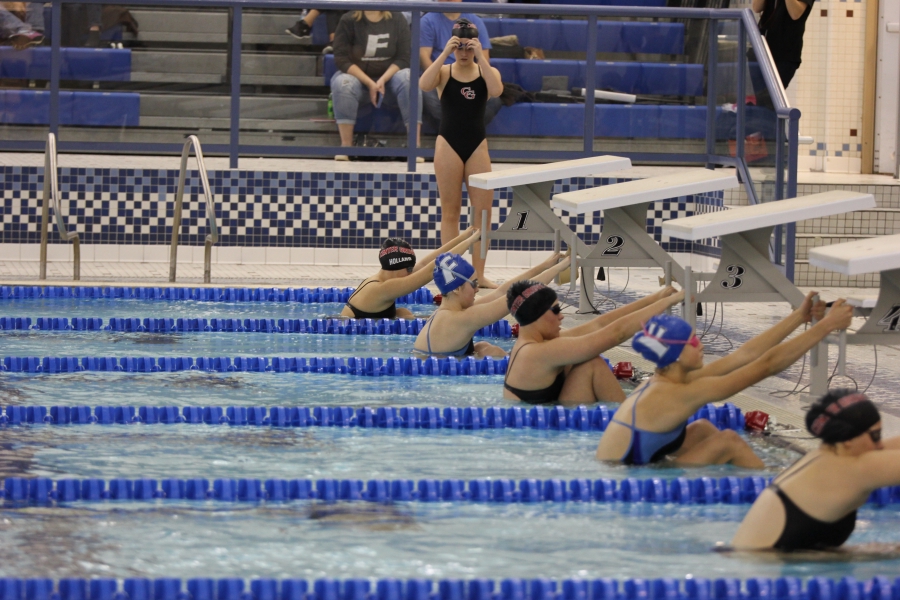 The Franklin Community Girls’ swimming and diving team kicked off the season with a 155 – 67 win over county rival Center Grove.

“We gave our freshman a chance to swim some desired events in their high school debut in hopes of giving them some momentum to begin the year. It’s a great group of girls and they’ve definitely worked hard to prove themselves.”

The Franklin freshman did just that. Franklin won 11 of the 12 events to take the 86 point victory.

The 200 Medley Relay team of Jessie Fraley, Kabria Chapman, Carla Gildersleeve, and Ella Pheifer kicked off the meet taking the first event with a time of 1:49.58. The Grizzly Cub women followed up that win with a trio of event wins in the 200 Freestyle, 200 Individual Medley, and the 50 Free. Lina Caudill took the 200 Free with a lifetime best of 2:00.96.

Immediately following, it was Freshman Lillian Lacy dominating the field in the 200 IM with a time of 2:22.12. Another freshman, Gracey Payne would go on to round out the first half of the swimming, winning with a quick early season time: 24.88 in her own high school debut.

Franklin diving had impressive morning performance from Madi Wheeler, who took 2nd in the event.

Coming out of the diving break, it was junior Ali Terrell with the 100 Butterfly win in a time of 58.63.
Sarah Hoffman, a sophomore, put together a solid swim to win the 100 Freestyle with a quick time: 54.49. She was accompanied by Gracey Payne and Jessie Fraley rounded out the top 3 finishes with times of 55.30 and 55.68, respectively.

On the distance side of things, junior Carla Gildersleeve put on a performance throughout the long distance 500 freestyle race. Her time of 5:07.85 won the race by almost 20 seconds.

The Lady Cubs alongside the FCHSSnD boys team will host the Bull Dogs of Columbus North tomorrow, November 21st at the Chick Newell Natatorium in Columbus (5:30pm) before the head into Thanksgiving Break training.