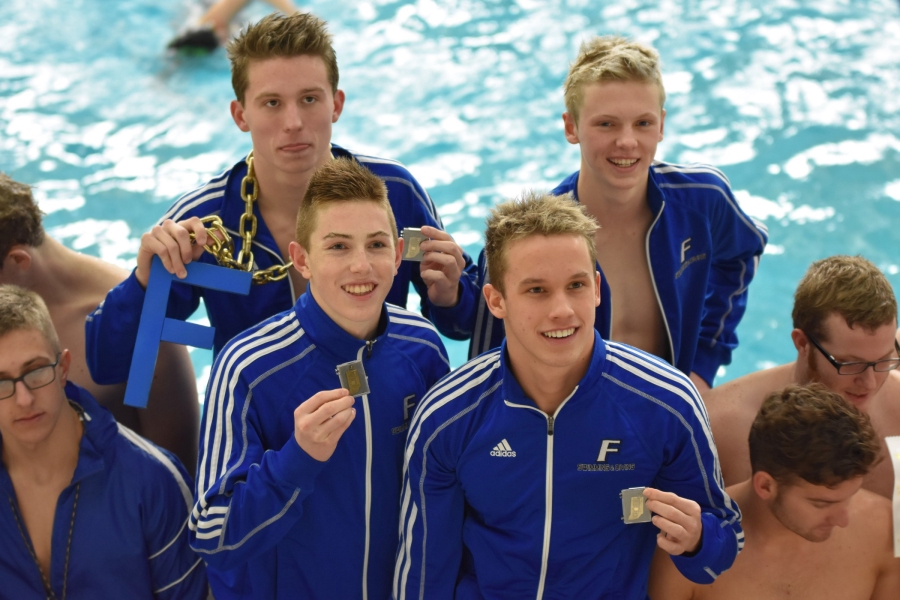 Please support our local Daily Journal, who does their best in order to support our FCHSSnD athletes! Link to article: http://www.dailyjournal.net/2017/01/09/grizzly_cubs_dominate_midstate/

1/8/17 10:10 PM
INDIANAPOLIS — With no drama in the team championship category at Saturday’s Mid-State Conference boys and girls swimming meets, Franklin coach Zach DeWitt found a way to inject some theatrics on the individual side.

When Grizzly Cubs freshman Max Kramer tied Plainfield’s Max Wiser in the 100-yard butterfly final, DeWitt negotiated an end-of-meet swim-off rather than accepting a tie and a split first-place ribbon.

Wiser edged Kramer in the swim-off, but that result belied an otherwise dominant day for Franklin.

The girls set five meet records and tied another en route to their championship, topping Whiteland, 565-375. Plainfield was third with 358, followed by Greenwood (226), Mooresville (211), Martinsville (198) and host Decatur Central (101).

Kramer, a freshman, already had won the 50-yard freestyle (21.96 seconds) and swam on Franklin’s winning 200 medley and 200 freestyle relays before swimming a second 100 butterfly. Wiser took an early lead in the deciding race, and Kramer stayed close but could never catch up.

“I didn’t really think much about how different it was; I just thinking about my race,” Kramer said. “I was glad to have my team there to help me through. The whole team has been making improvements.”

Franklin’s boys won all but two events, including all three relays. The 200 medley relay of Kramer, Jacob Destrampe, Griffin Edwards and Michael Couet set a meet record (1:36.95), while the 400 free relay (Destrampe, Edwards, Aaron Lamm and Brock Lock) sped to a lopsided victory in 3:16.36. It broke an 18-year-old meet record and was nearly 12 seconds ahead of runner-up Whiteland.

Edwards also won two individual events, taking the 200 individual medley in 1:58.74 and pulling a mild upset by winning the 100 backstroke in 54.54 seconds. He was seeded second behind Plainfield’s Chaz Rhodes entering the finals.

On the girls side, DeWitt singled out Franklin’s Ella Pheifer for having a “breakout meet.” Pheifer won the 50 and 100 freestyles in 24.97 and 54.48 seconds, respectively, and she also anchored record-setting 200 medley and 400 free relays. All three Franklin girls relays set meet records.

“For a while, I had been in a rut, and couldn’t seem to figure out how to get out of it,” Pheifer said. “I’ve been getting better mentally and physically.”

“Aside from the team support, I was most proud of our mental resolve,” DeWitt said. “We had a couple of kids who had poor races early and didn’t let that affect them. At the end of the meet, everyone is fatigued, but we still had strong performances.”

Whiteland coach Marci Whitford was named the conference’s Coach of the Year for her efforts in guiding the Warriors to second-place finishes in each meet.