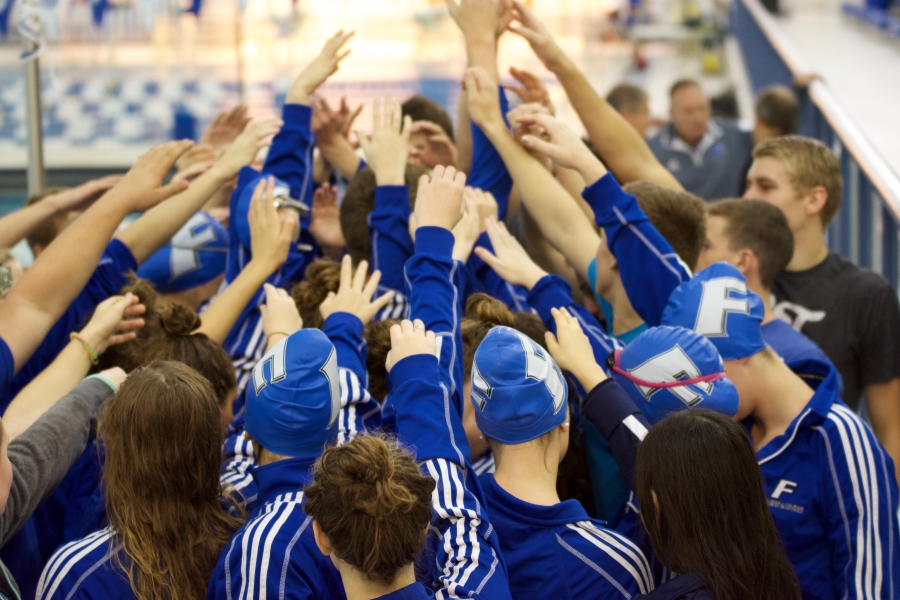 A season approaching a holiday break is always a unique time for a swim meet, as distractions can arise from excitement for the holiday season. On Tuesday night against visiting Columbus North, there weren’t many distracted athletes on the Franklin Community side. Franklin girls took 10 of the 11 events, while the boys managed to pull off 10 of the 11 events as well. Both sides cruised to 157-65 and 126-96 wins for the girls and boys, respectively. Coach DeWitt felt that the team’s performance was highlighted by the enthusiasm shown throughout the team.

“Fun swimming is fast swimming. Fast swimming is fun swimming. Sometimes, it’s hard to control which comes first, but tonight it was apparent that the athletes approached the meet with great enthusiasm. I have to credit the kids for bringing that approach to an early season meet. We can get better in terms of preparedness on the second half of the meet, but aside from that, we were prepared.”

The meet kicked off in impressive fashion for the girls and boys alike with the girls 200 Medley Relay winning team of Scarlet Friend, Gabby Hoffman, Carla Gildersleeve, and Abi Gibson taking first with a time of 1:51.13. Equally impressive Griffin Edwards, Michael Couet, Max Kramer, and Jacob Destrampe teamed up to break the 1:40 barrier with a time of 1:38.98.

Things didn’t slow down from there. Carla Gildersleeve, a double winner on the night, started thing quickly winning the 200 Freestyle with a 1:54.99. Sarah Hoffman and Lina Caudill rounded out the 1-2-3 finish both finishing under 2:01. Jacob Destrampe continued the momentum taking the boys 200 Freestyle with a 1:45.82, well ahead of last season’s early season times.

Ali Terrell and Griffin Edwards, sophomores for Franklin, both took the pair of 200IM wins, winning in times of 2:10.22 and 2:01.54, respectively. Anna McCahill and Gabby Hoffman swam to season best times, taking 2nd and 3rd points for the team. Michael Couet also had a huge early season swim, helping the team out with a close fought 2nd place finish (2:02.18).

The 50 free, a race typically won and lost by tenths and hundredths, was as exciting as ever during the girls 50 freestyle. Scarlet Friend in come-from-behind victory, squeaked out a 1st place finish with a time of 24.76. Ella Pheifer and Abi Gibson, both with phenomenal early season finishes, finished 3rd and 4th respectively. The boys race wasn’t quite the same close race. Freshman Max Kramer, in his high school debut, threw down a 22.45 for the win.

Coach Jerden was elated with his crews’ performances on the night, “I was very pleased with the overall attention to detail and aggressiveness of our racing. It’s just a good feeling to get an understanding of where we are at and then, of course, where we want to go from this point.”

Coach Ty Hoffman’s team took things from there, where the ladies on the boards finished 1- 2- 3. Senior Maddie Powell led the group with 186.55 points from her 6 dives. On the boys side, Gauge Creech faced one of his toughest match-ups of the year in Columbus senior Kaemon Jiles and fell short, with 219.45 points alongside a second place finish.

Franklin swimmers came out of the diving break red-hot with two sub-minute 100 Butterfly’s, Gildersleeve (57.00) and Anna McCahill (59.67) leading the charge. In the same race, Meghan Meinczinger, a freshman, lowered her lifetime best by over a half second (1:06.33).The boys answered with their own rendition as Max Kramer won the race handedly (54.56). The bigger swim, however, came from Sophomore Shane O’Sullivan, who was right off his lifetime best with a time of 57.24.

The 100 Freestyle was a tough battle between Abi Gibson, Ella Pheifer, and Columbus senior Darby Coles. Pheifer eventually fall to North’s Coles in the final 30 yeards. Gibson would finish in 3rd, while freshman Alex Hart finished 59.44. Franklin Seniors Aaron Lamm and Chance Gildersleeve made a rare appearance in some short events finishing 1st and 3rd in a hotly contested 100 freestyle.

The 500 Freestyle had a rather “youthful” look on the girls side with all participants being underclassmen. Sarah Hoffman and Jessie Fraley had a very exciting race, both leading the charge for the Grizzly cubs, as Franklin would go on to finish 1- 2- 4 alongside Lina Caudill. Jacob Destrampe dominated the boys side, swimming away from the field in a blistering time of 4:43.65. Brock Lock picked up where he left off from his sophomore campaign finishing with a 5:15.71.

In quite possibly the best race of the night, the 100 Backstroke featured 3 athletes, finishing in sub-minute times. It was Alexandra Nusawardhana of Columbus out in front with the win, while Friend, Fraley, Hart recorded a 2nd-3rd-4th place finish. The boys backstroke also had a tight race, where Griffin Edwards came out victorious in a time of 55.65.

Breaststroke wrapped the individual events up with wins from both Ali Terrell and Michael Couet. Terrell, with her second win of the night ran away from the field, posting a season-best time. Couet, a junior, looked good his season debut, swimming to a time of 1:01.19. Other notable performances came from Reagan Hendricks , who achieved a personal best time.

The Girls and Boys Swimming and Diving program will continue their seasons next week by visiting the Golden Bears of Shelbyville next Tuesday, November 29th at 5:30.