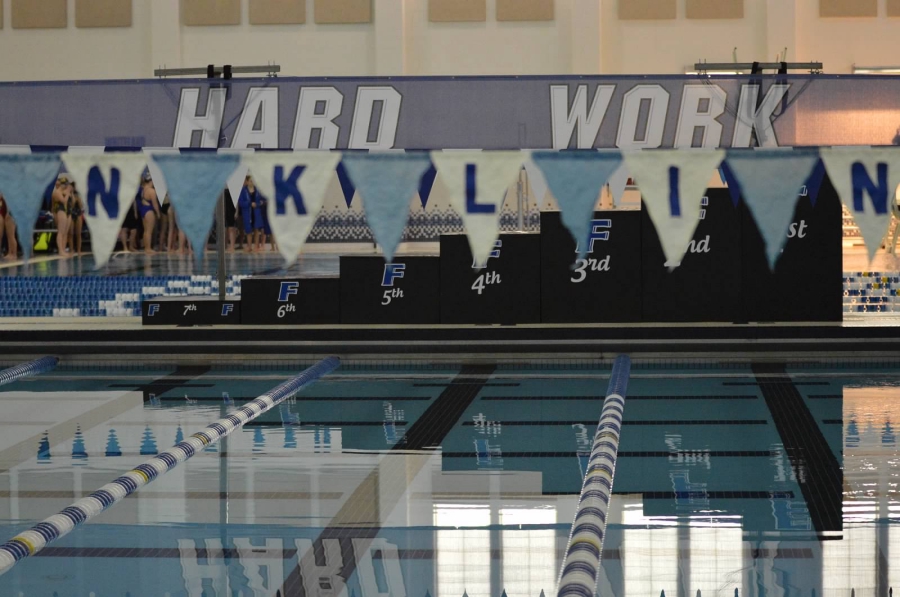 The Franklin Community Girls’ swimming and diving team kicked off the season with a 153 – 69 win over county rival Center Grove.

Franklin won all 12 of the 12 events to amass the 84 point victory, with big swims across the board from the Franklin underclassmen.

“We gave our freshman an opportunity to swim some on events in their high school debut in hopes of giving them some momentum to begin the year. They’re a wonderful group of young ladies that certainly deserved that kind of spotlight and we were very pleased with how they responded.”

The 200 Medley Relay team of Jessie Fraley, Gabby Hoffman, Meghan Meinczinger, and Ella Pheifer kicked off the meet taking the first event with a time of 1:55.75. The Grizzly Cub women followed up that win with a trio of event wins in the 200 Freestyle, 200 Individual Medley, and the 50 Free. Sarah Hoffman took the 200 Free with a lifetime best of 1:59.45 in her high school debut. Immediately following, it was Jessie Fraley winning to 200 IM with a time of 2:15.79. Scarlet Friend rounded out the first half of the swimming, winning with a quick early season time: 25.12.

Franklin continued the impressive morning into diving taking 1-2-4. Led by Maddie Powell, the Grizzly Cub ladies were in impressive early season form. Coach Ty Hoffman was elated with their performances.

“For us, it was a great early season meet across the board. We have alot of work to do, but I was very pleased with Maddie Powell, who seems to be exactly where she should be.”

Carla Gildersleeve, a sophomore, put together a solid swim to win the 100 Freestyle with a quick time: 54.04. Sarah Hoffman and Arden Friend rounded out the top 3 finishes with times of 57.07 and 1:00.29, respectively.

Next event up was the 500 Freestyle, where Freshman Lina Caudill put on quite a show throughout the long distance race. Her time of 5:29.18 was exactly what the coaches were looking for from an early season freshman swim.

Wrapping up the individual events, the Franklin ladies scored wins in the 100 Backstroke and 100 Breaststroke; the winning athletes were Ali Terrell and Gabby Hoffman, respectively. Ali Terrell, sophomore, raced out to an early lead and held on to win in an “off-event”in a lifetime best (59.93), while Gabby Hoffman had another early season fast time in her event (1:11.15).

The Lady Cubs alongside the boys team will host the Bull Dogs of Columbus North next Tuesday, November 22nd at the FCHS Natatorium (5:30pm) before the head into Thanksgiving Break training.